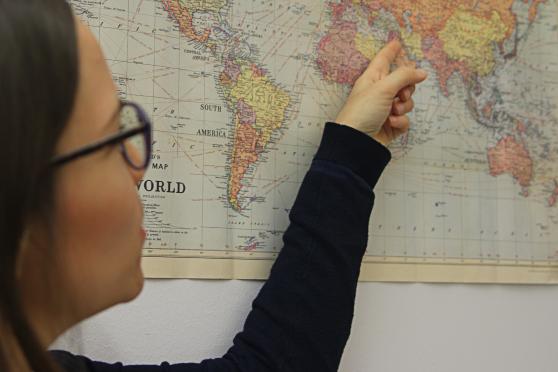 – In an ideal situation, a hearing impaired immigrant would receive the necessary information and support effortlessly, says Senior Coordinator Johanna Warius at The Support Centre for Immigrant Persons with Disabilities Hilma. However, this is generally not the case. An interpreter is essential for a person who doesn’t understand Finnish or Finnish Sign Language.

Imagine that you come to Finland from almost the other side of the world. Prior to that date, you might have been sitting in refugee camps for years or evaded authorities by hiding from daylight. You have escaped war or unrest, and you cannot go back.

For many, that’s not an imagination. Since 1973, approximately 50,000 refugees and asylum-seekers have arrived in Finland. Many of them come from difficult uncertain conditions. Some of the family has been left behind, or turned back during the journey. Many have been wounded, for example, lost their hearing due to war, or even torture.

– The conditions of becoming disabled can be really horrible. A large proportion of the people arriving in the country on the basis of humanitarian protection have gone through traumatic experiences in their home country, states Warius.

Hilma aims to keep a threshold as low as possible for its services, as many immigrants do not want to bring up their own disability, and even fear telling about it. Perhaps it is precisely due to this that Nappi could not get an immigrant family to be interviewed for the story, despite several attempts. According to Warius most of the immigrants’ questions relate to the practical life in Finland.

Hilma helps disabled immigrants who come to Finland. The aim of the Support Centre is to promote the rights of migrants and persons with disabilities and equal opportunities to participate in Finnish society. One of the Support Centre’s main methods to improve their position is to provide individual counselling for those who need help.

– How to get along in Finland? What social services are offered? What are immigrants entitled to? How to get a property? Many of the issues are also related to job or education enrolments, she lists.

Of course, there’s a lot of information available online. This doesn’t help many immigrants, however, as the Finnish language cause problems especially at the beginning. For that reason, an interpreter and an entity, who bring together the answers, or at least guide the person to the right place, are essential.

– Interpretation is the key point. Especially with authorities, the language is often difficult, when matters are discussed in official terms.

The Interpretation Activities’ Alliance formed by The Finnish Association of the Deaf, The Federation of Hard Hearing, The Finnish Deafblind Association, and associations of sign language and writing interpreters has required Kela to have a policy for how long the necessary interpretation for deaf immigrants to international sign language is compensated for. Kela’s response so far has been that the language groups are so small that there is no need for the recommendation.

The exact number of hearing-impaired immigrants cannot be said. The registration of sensitive data, such as disability or ethnicity, is limited in Finland and therefore accurate statistical information is not available.However, Warius has prepared for the interview with her own, theoretical calculations.

According to Statistics Finland, there are about 300,000 foreigners in Finland. According to the World Health Organisation (WHO) 5.3 percent of the world’s population is hearing-impaired. Of them, 9 per cent are children under 15 years of age. Accordingly, Finland could be calculated to have 15,900 hearing impaired foreigners, of whom approximately 1,430 are children.

– The number of immigrants is increasing all the time, so the demand for our services, such as ours, will at least not decrease, Warius notes at the end of the calculation.

There is of course reason to remember that the vast majority of immigrants come from other Western countries, or welfare states. Out of the Hilma’s customers, their share is, however, small. According to Warius, those coming from welfare states integrate in their new home country better than, for example, those arriving from developing countries or other crisis areas.

– In general, you could say that they do not encounter problems as often. For example, in Europe, societies are fairly similar, and those coming from these areas will often understand quite quickly, how things work in Finland.

According to Warius, a disabled immigrant is in the “double minority”. That is why he/she is offered a variety of services through a multi-agency response. However, access to services is made more complicated as the different government bodies still have some plot thinking.

– In immigrant services it is sometimes assumed that only their own plot needs managing, and guidance to disabled services is not necessarily provided. In disability services, on the other hand, the immigrant aspect may not be taken into account, Warius says.

Ideally, a disabled immigrant would obtain necessary information and support easily. Services must therefore be on offer. However, a disabled immigrant is in danger of being between a rock and a hard place if no one takes in to account his/her total situation. Pushed around, from one place to another and the uncertainty or lack of an interpreter would not hamper the integration into society. As an example, Warius says that disabled immigrants are often automatically denied employment or education enrolment.

Above all, Warius would like the attitude of non-discrimination of the disabled and immigrant to spread in the society.

– The system creates a self-image for many that they are not competent to work or study. Then, even your own will may be stamped down.

The text is a translation of an article that was originally published in Finnish (text and photo by Jani Savolainen) in the  Nappi magazine 4/2014 by Finnish Association of Parents of Deaf and Hard of Hearing Children.